(This is the latest entry about my times and life in New Mexico, and special experiences with the Earth Walks program I co-founded.)

I moved to Santa Fe in December, 1978 but on August 4, 1984 I received  a heartfelt welcome to my new home of New Mexico.  It happened at the Corn Dance ceremony, Santo Domingo Pueblo (now called Kewa in the original Keres language).

Over 500 dancers entered the plaza for the ceremony.  Umbrellas of onlookers sprouted like gaily colored flowers as the morning sun grew stronger along with the power of the drum and chanting.  Heartbeat, soul beat.  A whirlwind spirit moved through the area, stirring up dust and bits of paper borne high above the crowd. The clouds near the Jemez Mountains across the Rio Grande valley seemed to hear the call of the prayers because they arrived to shower us their gifts of a light rain, answering prayers offered by the dancers and drummers.

A jellybean ant–or so a little boy next to me called him–did his own ceremonial dance on my arm as I sat cross legged on the ground, eye level with the line of dancers.  At that moment, something happened in my awareness.  Drums beat in rhythm, their vibration transmitted up my spine.  I felt a wordless connection with the ceremony that was so foreign, yet so very familiar.

Hunger brought me back to the mundane.  I took my sack lunch out to the ocean of cars in the dusty parking area beyond the dancers and the plaza and found a perch on a concrete parking curb.  Suddenly I heard from behind me a woman’s loud voice:  “What are you doing?”  Uh, oh, I thought.  Was I violating Pueblo rules?  I turned around and there was the woman standing in the doorway of her home looking at me.  “Come in!” she said emphatically and with a broad smile.  “Come in and eat!”  I was being invited into her home to share a meal.  This was one of my first introductions to Pueblo generosity and hospitality.

This generosity has been a part of recorded history, ever since Spanish explorer Coronado was given shelter and food on his failed quest for the gold and riches of the fabled Seven Cities of Cibola.  When they saw Zuni Pueblo shining golden in the sunset, the story goes that they thought they had found the pot of gold at the end of the rainbow.  ‘Nothing’ but mud, they pressed on.  What Coronado failed to appreciate was the wealth and richness of the ancient indigenous cultures of the Southwest and their deeply rooted wisdom traditions.  Sitting at the table of my host in her home at Kewa, I tasted this golden heritage and felt honored and blessed.

A humorous side note:  In my earlier “wannabe” days in Santa Fe, I wanted to get a “Pueblo” ribbon shirt like the ones I saw men wearing during feast day ceremonies.  The ones I found were quite expensive.  During a shopping trip at a local western wear store, I found a brightly colored snap button western-style shirt I thought would serve the purpose, at a much more affordable price.  At one of the dances in Kewa Pueblo I attended after that, I noticed an elder in the ceremony who looked like he could be his nineties.  He carried a long ceremonial pole adorned with feathers and flags, moving and dancing with great vigor and concentration. Much to my surprise he was wearing  exactly the  same style shirt that I had bought at the store! It was one more way in which I felt like I had “arrived” in New Mexico.” 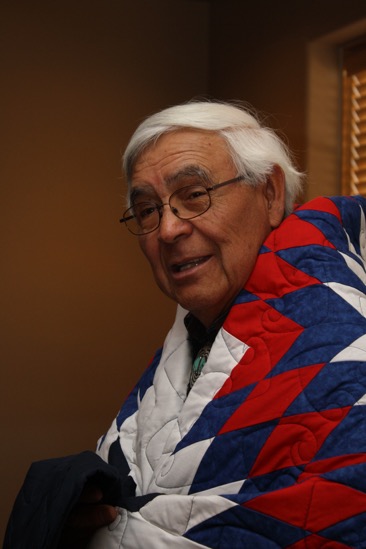 I joined about 40 other folks to experience the wit and wisdom of Cochiti Pueblo elder Arnold Herrera at his afternoon presentation in the main Library recently.  Arnold and his sons are skilled drum makers, storyteller and keepers of the traditions.  Mr. Herrera has led several drum-making Earth Walks retreats over the years.  Here’s a couple of his comments:

The only people that don’t make mistakes are those who don’t do anything.  (From his Dad)

The drum is the heartbeat of the earth and once you believe that, the miracles start happening.  If you don’t believe, you are just wasting your time.